A New Compleat Theory for the Highland Bagpipe, by Dr. Matthew Welch 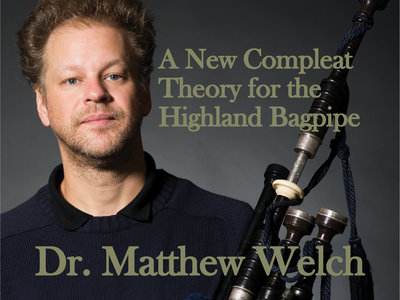 Each book purchase comes with a free download of the accompanying album of the same title, along with a PDF Ebook version of the book too. BEST DEAL: ORDER THE HARD-COPY BOOK!

The Scottish Highland Bagpipe, now heard around the globe, has long enchanted musicians and listeners for it’s brilliant tone, humming drones, and its profoundly stirring music. Mirroring Joseph MacDonald’s unprecedented and encyclopedic treatise of staff notations of the Highland bagpipe (1760-1803), Dr. Matthew Welch’s A New Compleat Theory for The Highland Bagpipe charts the complete (or the archaic “compleat’) trajectory of the use of the Highland Bagpipe up to 2020. Terse and insightful, this treatise will educate both the piper and composer. Included in Part II is a selection of Dr. Welch’s original and inventive compositions for the bagpipe in an array of traditional and modern forms.

“It seems in the world of music connected to the Great Highland Bagpipe a book comes along every 250 years or so that offers up a fresh view of the music - and its place in the world. In his “A New Compleat Theory” noted performer, composer and scholar, Matthew Welch succeeds in doing just that: a remarkable and rare amalgam of ideas that respect tradition while showcasing the broad - and exciting - potential of the instrument. A must-have for anyone who has ever held - or heard - a bagpipe.”
– Michael Grey, acclaimed composer and piper, Dunaber Music

“As a composer of new music for the highland bagpipe, Matthew Welch is a bold pioneer, an explorer of uncharted territories. Many of Matthew’s compositions explore ideas new to the world of piping; often unique and exciting, always mindfully crafted and thought-provoking. Although Matthew often builds on the established idioms of the traditional piping repertoire, ranging from jigs and reels to piobaireachd, he produces original new music that progresses piping to new realms. An examination of the music presented in this book will reveal a sense of humour, a sense of madness – a mad genius!”
- Mark Saul, composer-piper and electronic musician

"I have always found Matt's compositions, interpretations and performances to be thoughtful, creative, authentic and interesting. I still have a vivid recollection of hearing him perform The Vaunting at a solo piping competition in the Pacific Northwest in the mid-late 1990s. It is a testing piece to interpret effectively, and Matt played it in a rather maverick fashion, yet with maturity and flair that I found utterly captivating. The present work is yet another example of what Matt brings to music generally, and will be a valuable resource for serious students of the bagpipe and to non-piper composers who wish to better understand our instrument and its unique character."
- P/M Alan Bevan, Simon Fraser University Pipe Band

“This book is a significant contribution to piping, to the progression of traditional music, to composition, and to the exploration of entangling musical philosophies. It is brilliant, baffling, obscure, obvious, and quite simply wonderful.”
- James MacHattie, Director of Education at the College of Piping and Celtic Performing Arts of Canada, P.E.I.

Includes unlimited streaming of A New Compleat Theory for the Highland Bagpipe via the free Bandcamp app, plus high-quality download in MP3, FLAC and more.

ships out within 5 days